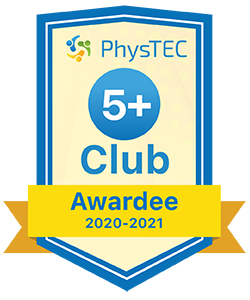 NJCTL is honored to be one of only ten institutions recognized by PhysTEC’s 5+ Club for the 2020-21 academic year.

Physics Teacher Education Coalition’s (PhysTEC) “5+ Club” is a group of institutions that have graduated five or more physics teachers in a given year.

Most colleges and universities graduate fewer than two trained physics teachers a year, with the majority graduating none at all.  Over the past twelve years, 282 teachers completed NJCTL's Physics Endorsement Program, about 24 per year!

We commend NJCTL on its outstanding contributions to the education of future physics teachers. Graduating more than five physics teachers in an academic year puts NJCTL in the 99th percentile of all US colleges and universities. We congratulate NJCTL for its excellence in physics teacher education and for serving as a national model for STEM teacher preparation.

The PhysTEC program is supported by the National Science Foundation and the APS Campaign for the 21st Century.